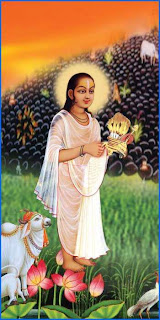 Shri Vallabhacharyaji was the initiator of Pushtimarga-the path of divine grace of God-as well as the founder of Shhudhadvaita-the Vaishnav school of thought which believed in pure non-duailsm.
In the path shown by Shri Vallabh one could achieve salvation or Mukti only through the devotion to Lord Shri Krishna,who is the creator of the universe as well as who is omnipresent in each and every molecule of this universe.Shri Vallabha told the world that Shri Krishna was the supreme being and so there was nothing we could give to him Him so as to please Him.The only thing a mere living being could do was to serve Lord Krishna whereby he could please Lord Krishna and get blessings and could get out of the Sansar which is created around him and is misleading him.
Shri Vallabh's philosophy is based on the teachings of the Upanishads.Shri Vallabh considers only four scriptures as pramans (proofs) for supporting his philosophy,they are:


Based on these four pramans Shri Vallabh propogated a new system of philosophy known as the Shhudhadvaita.For the re-unision of the vaishnavas with Lord Shrinathji he started the sewa pranali of Lord Shrinathji on the order of the Lord himself.

Parabrahman exists in all the living and non-living beings  that we see in this world.The Parabrahman is made up of three different gunas (characteristics) - Sat (matter), Chit (liveliness) & Anand (happiness).Any non-living thing like a stone or a house possesses only the Sat guna.It neither contains liveliness nor happiness.On the other hand any living being (Jiva)like man or any animal possesses two gunas i.e. the Sat and Chit.The Chit guna in a man makes him a living being.The only guna man doesn't possess is the Anand.It because of the lack of Anand in man that we find people running here and there in search of happiness and peace of mind.And lastly only God possesses all the three gunas viz.Sat,Chit and Anand.There is nothing according to Vallabhacharya lacking in God.According to Shri Vallabh any being possessing these three gunas is God.If man is successful in achieving the Anand guna,then he re-unites with God.So the effort of Shri Vallabh through Pushtimarg is to help man achieve Anand.
Along with Shri Vallabhacharyaji many other acharyas believed in the philosophy that advaita i.e. jiva and Parabrahman are eventually one.Ramanujacharyaji's philosophy is called Vishishtadvaita, Nimbarkacharyaji's philosophy as Dvaitadvaita and Shankaracharyaji's philosophy as Kevaladvaita .Only Madhvacharyaji deferred regarding the philosophy of advaita.He believed in dvaita i.e.Jiva and Parabrahman are different from one another.   The philosophy of sewa shown by Shri Vallabh is unique.It is quite different from the general concept of Pooja as seen in the Sanatan Dharm.Shri Vallabh tells us that it is our foremost

duty to serve Shri Krishna as he is Lord(swami) and we are his servants(sewak).This is the main concept of sewa.Shri Vallabh has preached this to his vaishnavas.In Chatushloki (the grantha in which the Dharma,Arth,Kama & Moksha of a vaishnava are described) Shri vallabh has taught this thing in the first shloka itself.It is written as such :Sarvadaa sarvabhaaven bhajaniyo vrajaadhipah
Swasyaaymev dharmohi naanyah kvaapi kadaachana
The meaning of this shloka is that the Dharma (prime duty) of a vaishnava is to always do the sewa of Vrajaadhip Shri Krishna whole-heartedly,barring this there is nothing else a vaishanva must do!!
Posted by Navneetlal Goswami at Friday, August 24, 2012