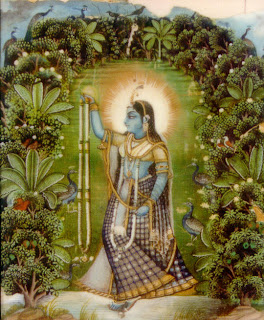 Shri Yamushtakam is the first among the sixteen works known as shodashgranth. This particular granth is composed by Shri Vallabh in v.s.1549(1491 A.D.) on the Shraavan Shukla 3 during the prithvi parikrama Shri Vallabh was in Gokul and he was undecided about the exact place of Thakurani Ghat. At that time Shri Yamunaji herself appeared and guided Shri Vallabh and pointed out the exact place. Shri Vallabh than and there composed Shri Yamunashtakam,the beautiful stotra,in the praise of Shri Yamunaji. It consists 9 verses,eight of them are written in praise of Yamunaji and in 9th Shri Vallabh describes for daily paath- doers the fruits of Shri Yamunashtakam.
The fourth beloved (turyapriya)of Shri Krishna,Shri Yamunaji is epitome of selfless devotion towards Krishna,and only through her  or her Kripa(grace) a jeeva(soul) can experience the param phal i.e. leela-pravesh. She purifies souls and removes all obstacles which are in the way between jeev and prabhu and gives the exalted jeeva a new body fit to experience the leela-phal-"tanu-navtva"! For ordinary bhakta of to-day the recital of Yamunashtakam daily will enhance his love towards Shri Krishna,abolish his paap-bad deeds and above all the bhakta will be able conquer his svabhava-basic instincts.

I (Shri Vallabh)bow joyfully to Shri Yamunaji,the giver of divine super natural powers for experiencing the bhagvadleela. Shri Yamunaji is loaded with the glistening sands emanating from the lotus feet of Murari Shri Krishna. The water of Shri Yamuna is scentedwith the perfumes of blossomed flowers from the forests located on the banks of Shri Yamuna,such Shri Yamuna is worshipped by gods and demons equally. II1II

"Falling forcefully on Mount Kalinda Shri Yamunaji appers to be crystal white and looks beautiful with her luxurious flow through cheek like rocks of mountain. Shri Yamunaji follows a zig-zag path noisily and while she flows up and down she looks as if sitting on a beautiful swing. Shri Yamunaji is superior as she enhances our love towards lotus-feet of Lord Mukund. II2II

Shri Yamunaji is adorned with countless virtues and is worshipped by Shiv,Brahma and other gods. She has a lustre of rain filled clouds and fulfilles the desires of sages like Dhruv and Parasher. Pious city Mathura is situated on her banks and she is surrounded by gop and gopees whose only refuge is kripasagar Shri Krishna.O Shri Yamuna! please bless me with the happiness of mind II4II

Shri Gangaji who has emerged from the lotus feet of God could become beloved of Krishna and fulfilled every wish of her followers only after her merger with Shri Yamunaji. Shri Yamunaji can be compared with lotus born Shri Laxmiji only, who is also Shri Krishna's beloved. Shri Yamunaji  who destroys all the ills of Shri Krishna's devotees may live in my (Shri Vallabh's)heart forever. II5II

O Shri Yamuna! Your character is wonderful!! A person who partakes your water has no fear of pain inflicted by Yama-the god of death-as how could he hurt his sister’s sons(devotees)however wicked they may be because they become beloved of Shri Krishna like Gopikas by serving you! O Shri Yamuna! Let us pay obeisance to you incessantly.II6II

O beloved of Mukund Shri Yamuna! By your nearness let my body become new(worthy) so to gain the love of Shri Krishna-the enemy of demon Mura- is not difficult. So let us shower you with love(by prayers) as Ganga became famous only after merging with you and was not worshipped by Pushti-Jivas before that.II7II

oh! Shri Yamunaji! the co-wife of Laxmiji! The beloved of Krishna!! no one is competent enough to praise you. By worshipping Laxmi with Shri Hari one gets the bliss of salvation only while you give much more- as your water is mixed with sweat generated by the bodies of Shri Krishna and Gopikas while having exotic sports and by worshipping you the devotee gets the bliss of this too.II8II

O Shri Yamuna! Daughter of Sun!! A person who always recites these eight stanzas with joy gets freedom from all of his sins and he surely gets affection of Lord Shri Krishna by which he attains all the super natural powers. Shri Krishna-the enemy of demon Mura-becomes satisfied and devotee conquers his nature so says Shri Vallabh.II9II
Posted by Navneetlal Goswami at Tuesday, August 14, 2012