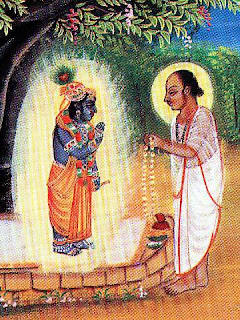 This is one of the most important works of Shri Mahaprabhuji. In this granth Shri Vallabh has laid the foundation of Pushtimarg.
Shri Vallabh took birth in this world to take back the daivi jivas (pure souls) to the heavenly abode of prabhu - Gauloka. But on coming to earth Shri Vallabh became worried that jiva is full of vices (doshas) and prabhu is so pure, how can both be associated because there is no way to make a jiva nirdosh (pure) for meeting God. During his second Prithvi Parikrama Shri Vallabh was in Gokul and on the 11th day of the bright half of Shravana month he was lying down at Govind Ghat but he was very much engrossed in the above mentioned problem. There Shri Thakorji himself appeared and promised Shri Vallabh that he will accept jiva initiated by Shri Vallabh or his descendants through 'Brahma-sambandh' mantra, irrespective of the jivas failings or impurities.  Shri Vallabh has described the whole episode, word by word, in the grantha 'Siddhant Rahasya'. Shri Vallabh initiated Shri Damodardasji as the first vaishnav of Pushtimarg the following morning.

On the midnight of the 11th day during the bright half of the month of Shravana, what Lord Krishna told me, I will recite verbatimII1II (Note : By stating time etc. Shri Vallabh declares that this path of divine grace is revealed to him by God himself though bhakti is described in scriptures.)

Shri Krishna told me that after dedicating himself and all his belongings to God i.e after Brahma-sambandh the impurities of the soul are totally removed. It is said that there are five types of impuritiesII2II

Impurities mentioned in the Vedas and world are 1) By Birth 2) Place 3) Time 4) Circumstance 5) Physical contact. All the five doshas (impurities) are not counted after taking Brahma-sambandh.

These impurities can never be removed without contact with Brahma through Brahma-sambandh. Therefore anything not offered to or used by the brahma i.e God should not be used by us alsoII4II

Dedicated souls (Brahma-sambandhi jivas) should perform all actions & activities by first dedicating them to God, this should be the way of life for a bhakta (devotee). Any article which we had used previously should never be offered to God as it is considerd 'Swami-Bhukta' (half-eaten/used).

Before doing any activity all should be offered to God, the statement that says that "We cannot use articles which we had offered to God" are not related to Pushtimarg but to some other form of bhakti. (In fact in Pushtimarg we must use every article believing it to be the prasad of God)II6II

Like good servant are known in world for selfless service, so are the devotees of God. By doing so (offering everything to God first) everything becomes godly for the devotee and everything offered becomes free from impuritiesII7II

Just as impure water becomes Ganga after coming into contact with river Ganga, it is no longer known by it's good or bad attributes but as river Ganga only. Similarly anything offered to God becomes pure & perfectly divine once God accepts itII8II
Posted by Navneetlal Goswami at Tuesday, August 14, 2012